How to demagnetize the screwdriver: with the help of the device, in other ways

Sometimes magnetization screwdriver benefits, and sometimes - this is an undesirable property. For example, when in the workplace there is metal shavings, it is better that it is there and stayed, and do not stick to the instrument. Is it possible to demagnetize the screwdriver, and how to do it?

Why is magnetized metal

I will not go into quantum mechanics and try to explain the most simple language. We all know the magnets - a product made entirely of so-called ferromagnetic material, which creates its own magnetic field.

Elements such as iron, cobalt and nickel, are part of the screwdriver, also belong to ferromagnets.

Reference. Since the alloy, there are other substances, the magnet in the usual understanding of this tool can not be called.

However, in certain conditions, the magnetic field produced by ferromagnetic, can be enhanced or reduced.

Amplification of this field or in other words, magnetization screwdriver occurs usually when working near electric motors, magnetrons, and other elements. Metal like "picks up" properties of the surrounding field.

As with the device demagnetize

Completely remove the magnetic properties of metal products is not possible. We can only reduce its magnetic to such an extent so as not stuck chips and small parts. It is important to consider when repairing electronics.

For such a reduction (or, conversely, improve, if necessary), there are special demagnitizatory, which can be purchased in stores or repair of instruments sold by the company. They are inexpensive and they look something like this: 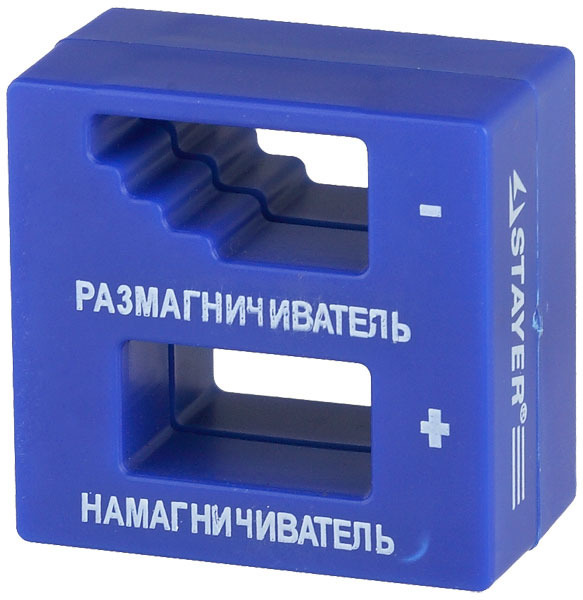 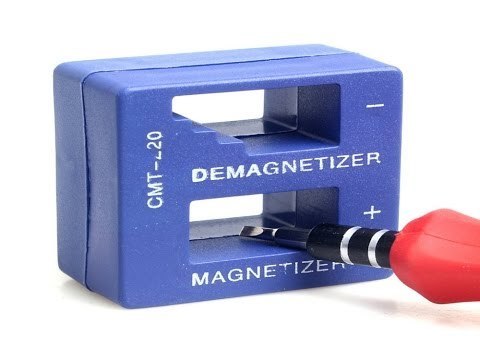 As you can see, everything is simple: two spaces, demagnetize the upper, lower, on the contrary, magnetizes. The desired tool is placed and kept there for about ten seconds, after which it is ready for use.

Reference. Magnetized screwdriver is usually faster than the demagnetized.

There are different sized models of these devices, from pocket - for small tools to large - for use in a production environment. Accordingly, they are different and the impact of power.

The convenient handheld device such as this is that it requires no connection to anything - it is always ready for use. Check its operation easy even in the store: you just have to take a screwdriver and some fine detail, such as a nut, and to conduct an experiment. After magnetizing screwdriver nut should be easy to be attracted to her, and after demagnetization does not "stick" even with close contact.

What else there are ways

If you have at home there is a round magnet with a hole in the middle, you can use it to demagnetize the screwdriver.

Important! The hole should be wide enough so that it could pass through the whole instrument, along with a pen.

It's enough to thread a screwdriver through the magnet, since the tip and ending with the lower part of the handle. This action is carried out in an unhurried pace. As a rule, for the demagnetization enough once, but can be repeated as needed.

If the holes are not available or insufficiently wide, there is a second way. Place the screwdriver relative to the magnet at the minimum distance at which it is not attracted thereto. Then, making a small "oscillating" motion, move it from one pole to another, gradually moving away from the center. The farther it is, the less should be fluctuations. After that it must be demagnetized.

For the third method, we need a magnetometer. First, determine the level of magnetic field intensity screwdriver. Then find a field with the same voltage on the magnet, but the pole with the opposite sign. After that, you will remain a screwdriver to press it to the side.

Create a device to demagnetize your own hands

To do this you will need a wire coil that can withstand the stress of 120-127 volts and a powerful step-down transformer. Assembling structure occurs according to the following scheme. 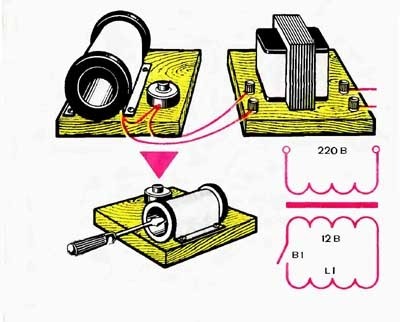 Wire wound around the bobbin of the transformer, and connect thereto. Thereafter, a screwdriver is placed into the inner cavity of the coil, and alternating voltage is supplied.

Reference. To reverse the action (magnetization instrument) is changed to constant voltage.

If you have an old TV set unnecessary, it is possible to assemble their own hands the instrument, which includes a picture tube degaussing loop (it is around him). Connect it ends with each other to get a circle, and wrap with tape, leaving outside two wires.

Strapped to a bar to obtain a structure of wood, which will serve as a handle. With the help of a button from any power tool, connect the two wires to a network of 220 volts.

Important! Be sure to insulate the wires and contacts, so you do not electric shock!

The device is ready for use. Turn it on and put it in the ring screwdriver. Keep it no longer than 5 seconds, then turn off the device, otherwise it may overheat.

Ways to demagnetize the screwdriver at home there is a huge amount, so you can choose any which you want.

If you need something to fix, and act as a fastener screws, self-tapping screws or screws that have the support of a screwdriver. Screwdrivers and cordless screwdriver has not everyone, but it was ...

What is the impact screwdriver: Specifications toolInstrumentsScrewdriver

During the plumbing work is often the master may face the problem of a rusted fasteners. It can try to unscrew the ordinary screwdriver or cause him WD-40 to remove the rust. But not always it can ...

Most likely, for any "real man" will not be opening that appears one of their amazing property when working with screws and other small things. The property is at times borders on magic - they mana...