How to use the impact screwdriver: Technology at work security

Quite often during the plumbing or repairs have to deal with rusty bolts or other fasteners. Unfortunately, any attempt to use a conventional screwdriver will not give the desired result and does not help to remove the screws.

Moreover, in some cases, can disrupt the slot, damage the tool or to get injured. Particularly problems arise with aluminum fastening as corrosion acts almost as welding in such a compound (a strong liking elements one to one). In such cases, the aid comes a special tool - the impact screwdriver.

How does the impact screwdriver

Impact screwdriver differs from the standard in that it is equipped with a special reinforced hull. It is made of durable material and is able to withstand high impact loads. It includes an extensive set of bits - of all sizes and types. They are installed on the rod in the same way as a standard screwdriver with removable heads.

In addition to enhanced body such instrument has control torsion.

Many experts call this reversible screwdriver. This tool is very popular in the days of the USSR.

However, if the design has been monolithic and more simple. Over the years, the tool was modified and he was given a hexagon, which is fixed near the tip or near the handle.

Old screwdrivers can be loosened or tighten fasteners only two of us: one holds the other strikes. Modern tool - this improved device. With the updated impact screwdriver is now possible to use one. 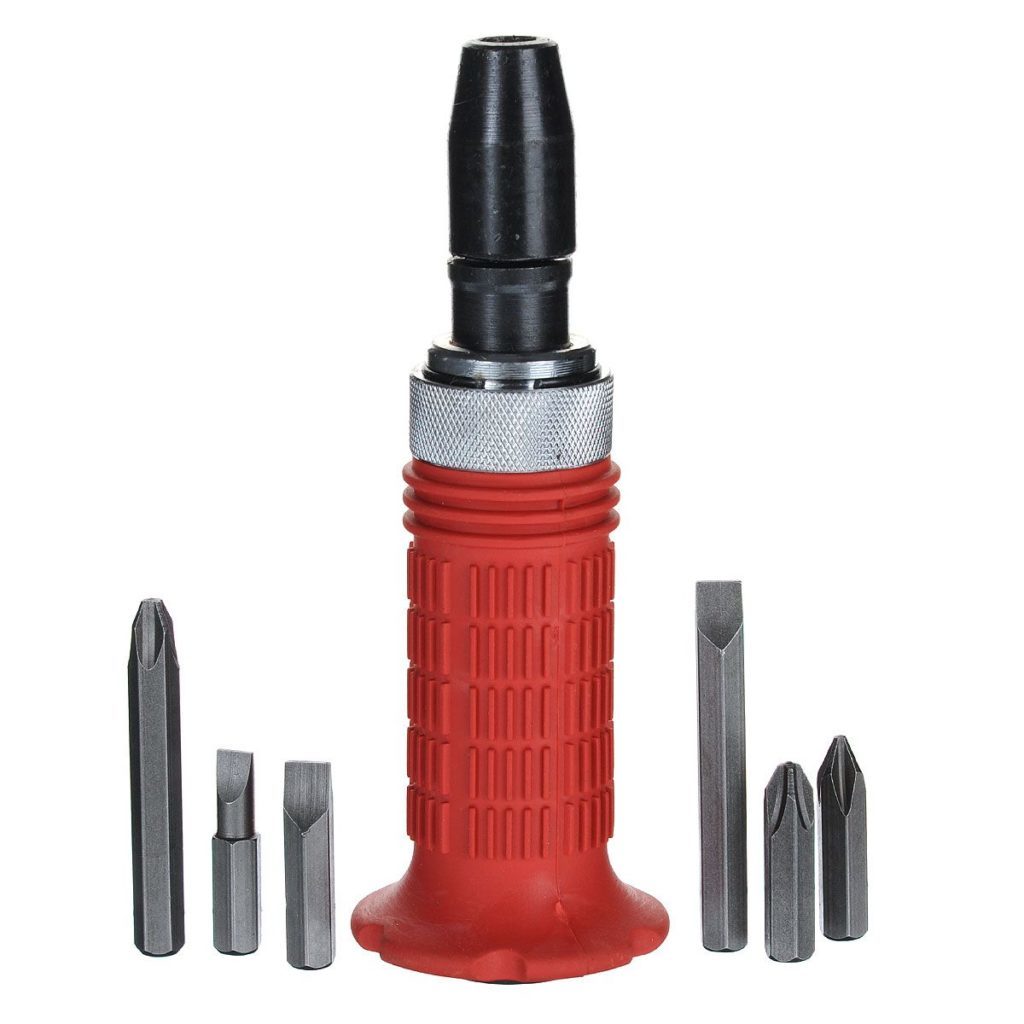 The new models, which are now available on the market, the shock-rotating mechanism located in the handle, and the sting is placed on the gear. The rotation starts at strikes a heavy object on the handle.

Attention! Strokes do not need to be applied with full force, but only by half. Too much pressure can damage the handle and shock-turning mechanism.

During strikes clip rotates by sliding fasteners. It's enough. After that you can unscrew the screw with an ordinary screwdriver.

If you need to tighten a bolt, it is done almost the same operation. She will be only one difference - the fastener is twisted not to stop, because it can damage the element, which is screwed fasteners.

How to use the impact screwdriver

To work on loosening was the most rapid and simple, just need to follow a few simple rules and do not make mistakes. Some of these rules include:

It is recommended that after the mounting head a little shifted to the side, put the reverse and reapply a few punches. Then again put the screwdriver in the loosening and make a few strokes. Repeat this cycle you need 3-4 times. This allows you to unscrew the fastener is much easier and faster, as well as to preserve its integrity.

If the fastener still will not give in, you need to apply a small amount of WD-40 and leave for half an hour. Then repeat the unscrewing manipulation.

If there is a reverse function, then a screwdriver can also be used to tighten the fasteners. It also repeated shocks several times, but, as mentioned above, avoid full twist.

This tool has a number of advantages. These include:

However, it should be taken into account and some minuses. These include the risk of breaking the shock-rotary mechanism and its wear.

In order to avoid various troubles during the operation, it is necessary to observe safety precautions:

If you need something to fix, and act as a fastener screws, self-tapping screws or screws that have the support of a screwdriver. Screwdrivers and cordless screwdriver has not everyone, but it was ...

What is the impact screwdriver: Specifications toolInstrumentsScrewdriver

During the plumbing work is often the master may face the problem of a rusted fasteners. It can try to unscrew the ordinary screwdriver or cause him WD-40 to remove the rust. But not always it can ...

Most likely, for any "real man" will not be opening that appears one of their amazing property when working with screws and other small things. The property is at times borders on magic - they mana...