Contents of the article: Branched, like the horned ginger roots are rich in vitamins, essential oils and other substances that have a positive effect on the body. A decoction of the roots of a plant or ginger tea has deserved recognition throughout the world.

Fresh ginger can easily be found on the counters of shops in vegetable rows. If only recently his appearance caused bewilderment among culinary experts and crop lovers, today tropical culture has reliably taken root in the kitchens of Russians, in pots on window sills and even on private plots.

The benefits and harm of ginger tea 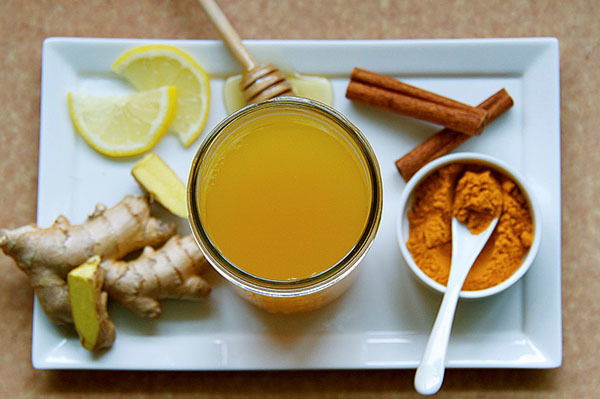 The spicy, burning palate of the root tastes well with dishes of meat, vegetables and fish, hot soups and sweet pastries. But the glory about the benefits of a juicy root was sold thanks to ginger tea. Taking just one sip, you can appreciate the unusual, spicy-burning taste of the drink, which in the heat can quickly refresh and quench your thirst, and in wet weather will be the best remedy for chills and colds.

The popularity of ginger tea is obliged to traditional medicine of the peoples of the East, where the plant can be found in nature, and its beneficial properties have been known for more than one thousand years.

Official medicine also recognizes the right to be called medicinal raw materials for the “horned” root. But at the same time, physicians tirelessly remind that the benefits of tea with ginger and the harm of the drink are close neighbors. One has only to get carried away with a bioactive drink or forget about the available contraindications, and there is a risk to get acquainted closely with the side effects of taking a folk remedy.

Excessive consumption of ginger tea threatens with bouts of vomiting, fever and blood pressure, indigestion and allergic reactions to the active components of the plant. The most serious consequences of their recklessness can be felt by people suffering from:

Without the permission of the doctor, tea with ginger should not be carried away by expectant mothers and women who are breastfeeding.

During pregnancy, ginger tea brings real benefits by strengthening the immune system, fighting constipation and wards, removing toxins from the body and helping to cope with toxemia. But in later periods, it sometimes turns into a threat to the health of the mother and child, causing increased uterine tone, provoking a rise in body temperature and increasing the risk of bleeding.

Read also: The benefits and contraindications to the use of ginger tincture on vodka 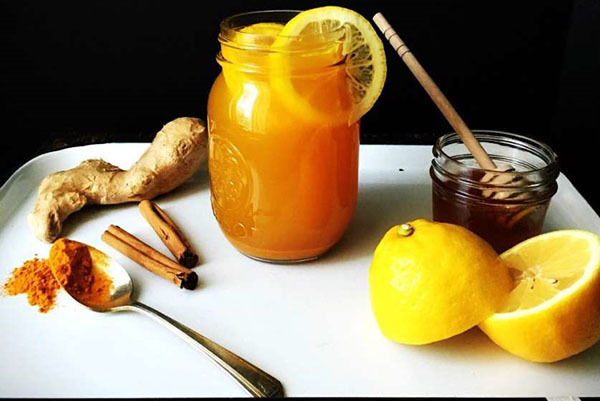 Yet the benefits of ginger drink are much more than the possible harm. The strength of the effects on the body ginger root can be compared only with such medicinal plants as garlic or ginseng. True, the ginger broth range of problems covered is much wider.

Hot is an excellent prevention against respiratory and viral diseases, infections of the mouth, respiratory organs and nasopharynx. 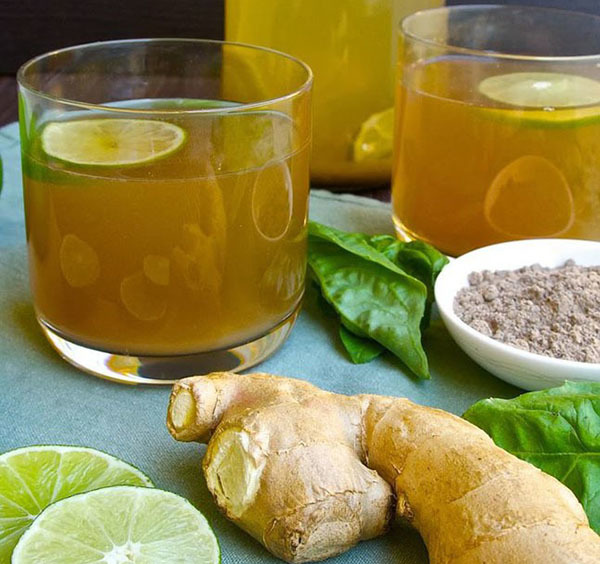 Ginger tea prepared according to any of the many recipes prevents the development of varicose veins, prevents the formation of blood clots, stimulates digestion and speeds up metabolism. Like garlic, this drink can also be used for antiparasitic purposes.

How to make ginger tea?

Today, at the disposal of people who want to improve their health, and lovers of bright exotic cuisine, there are many interesting recipes for ginger tea. The invigorating spicy taste of ginger goes well with black and green tea, lemon and other citrus fruits, spices and honey, with spicy herbs and berries.


But before making ginger tea, juicy, elastic rhizomes are thoroughly washed and cleaned of light skin, crushed with a knife or coarse grater.

In order to transfer the most complete bouquet of useful substances to the drink from ginger, you should choose young smooth rhizomes with a surface punctured by nails and a small number of hardened areas. If the acquired ginger has faded a little during storage, the night spent in warm water will help it to return juiciness.

How to brew ginger tea? The composition of the infusion may include a variety of ingredients. Their selection depends on what result a person wants to achieve, as well as his taste preferences. But the basis of tea is crushed fresh ginger.

Read also: The recipe for preparing dandelion tinctures and the rules for its use 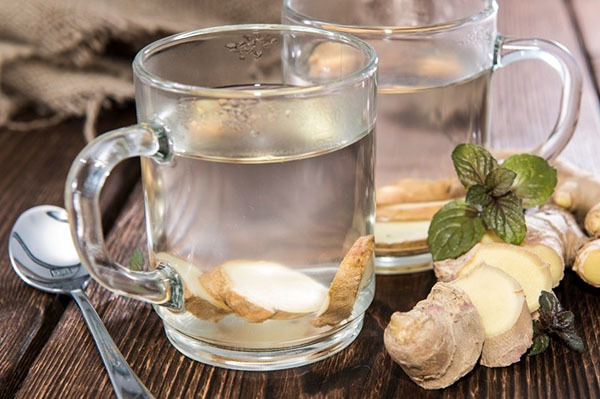 In the simplest case, take a teaspoon of burning pulp for a glass of boiling water. Drink insist from 5 to 10 minutes, and then drink cold or hot. To help ginger tea to suppress the appetite and intensify digestion, it is better to use it in between meals. Before bed, it is better to refrain from such drinking. An invigorating infusion can give a gourmet a sleepless night or put off a night's rest for a few hours.

Lemon ginger tea with honey and honey is one of the most popular and well-known. In addition to the crushed ginger root, a spoon of bee honey and a slice of lemon provide the taste of the drink. Before going to the infusion, the lemon must be washed under running hot water.

Sometimes, trying to get as much benefit from the drink as possible, the adherents of a healthy lifestyle do not put a thin slice of lemon in the tea, but squeeze out the juice from almost the whole fruit. This is not worth doing. Excessively sour ginger tea is not so tasty, and the increased acidity can be harmful, causing an attack of heartburn.

Lemon and honey are added to the already prepared infusion, immediately before use. The high temperature of boiling water destroys vitamins and changes the properties of honey, which is completely undesirable when it comes to a drink for healing.

Ice tea with ginger, fresh mint and a pinch of nutmeg is tasty and healthy. Such a drink perfectly quenches thirst, but, in addition, will help calm down, give strength and contribute to the removal of toxins.

In this case, crushed ginger is pressed together with mint and crushed nutmeg on the tip of the knife. After half an hour, the liquid is filtered and cooled. When serving, add fresh juice of grapefruit, orange or lemon to taste. If you suffer from coughing, you can use the recipe for ginger tea, according to which anise seeds are infused with boiled root in boiling water. Dried fruits, to enhance the extraction, are ground before laying in boiling water. A glass of water requires a teaspoon of seeds and a third of a spoonful of ginger. After a 10-minute infusion, the drink is filtered and drunk warm several times a day. 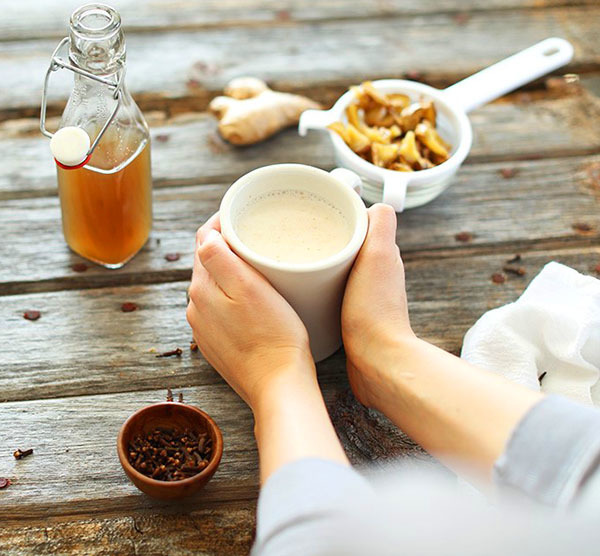 During pregnancy, ginger tea helps to get rid of morning sickness, swelling and lethargy of the digestive system. To relieve indisposition will help drink based on sweet broth of ginger and mineral water without gas. A glass of water will require a third of a glass of sliced ​​ginger roots and a tablespoon of sugar. The ingredients are heated and allowed to boil for at least 5 minutes. To make the drink transparent, it is useful to remove the foam that forms when it is heated. Then the ginger syrup is removed from the heat and cooled. Before use, lemon juice and mineral water are added to taste in syrup.

Spicy burning tea with cinnamon and cloves will quickly warm and will not let you get sick on the most frosty day. How to make ginger tea with spices? On a glass of boiling water take a teaspoon of grated ginger root, a few clove buds, cinnamon stick and zest of one lemon or orange. Bay spices and ginger pieces of water, the mixture is brought to a boil and leave on low heat for no more than 5 minutes. Then the liquid is filtered, poured into cups and drink in the form of heat.

Video about the benefits of ginger tea