Pressure in the expansion tank of a gas boiler: norms and methods of regulation

A single-circuit or double-circuit gas boiler is equipment that makes our life in a house or apartment more comfortable. Manufacturers now produce a huge range of gas appliances that differ in power, functionality, and installation method. However, even the most expensive and reliable models can fail. Agree, it is not very pleasant to stay on a winter evening without warmth and hot water.

After analyzing the possible causes of breakdowns in gas equipment, we came to the conclusion that most often failures occur due to the fact that the pressure in the expansion tank of the gas boiler is incorrectly set, or water heater. In the article, we will figure out what an expansion tank is for, how to independently pump air into it and adjust the optimal pressure.

What is an expansion tank for?

In the process of heating, water tends to expand - as the temperature rises, the volume of the liquid increases. In the circuit of the heating system, pressure begins to build up, which can destructively affect the gas equipment and the integrity of the pipes.

The expansion tank (expansomat) acts as an additional reservoir, into which the excess water formed as a result of heating is squeezed out by pressure. When the liquid cools down and the pressure stabilizes, it is piped back into the system.

The expansion tank acts as a protective buffer, it extinguishes water hammer, which are constantly formed in the heating system due to the frequent switching on and off of the pump, and also eliminates the possibility of air congestion. 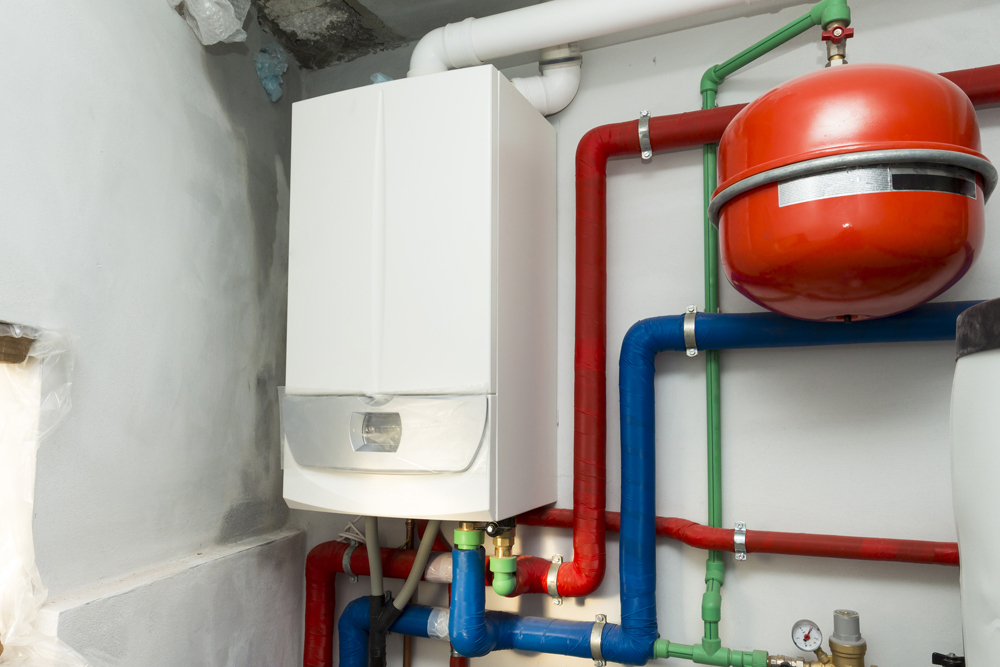 To reduce the likelihood of air congestion and prevent damage to the gas boiler by water hammer, the expansion tank should be mounted in front of the heat generator, on the return

There are two different versions of the damper tanks: open and closed types. They differ not only in design, but also in the method, as well as in the place of installation. Let's consider the features of each of these types in more detail.

An open tank is mounted at the top of the heating system. The containers are made of steel. Most often they have a rectangular or cylindrical design. 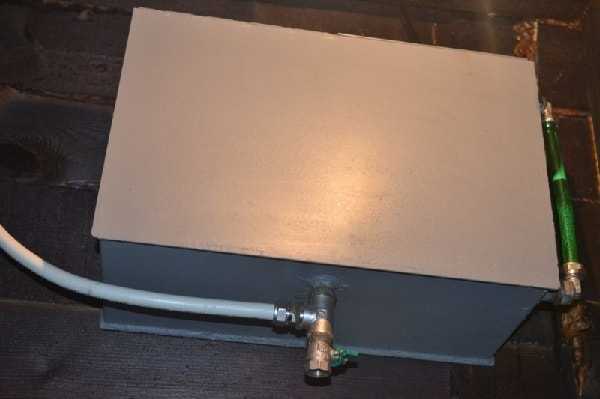 Usually such expansion tanks are installed in the attic or attic. Installation under the roof is possible. Be sure to pay attention to the thermal insulation of the structure.

There are several outlets in the structure of the open-type tank: for water inlet, cooled liquid outlet, control pipe inlet, as well as an outlet pipe for draining the coolant into the sewer. We wrote in more detail about the device and types of an open-type tank in our other article.

Despite the functionality of open expansion tanks, they are practically not used anymore. Since they have many disadvantages, for example, the large size of the container, the tendency to corrosion. They are installed in heating systems that work only with natural water circulation.

In heating systems with a closed circuit, a membrane-type expansion tank is usually installed, it is optimal for any type of gas boiler and has many advantages. 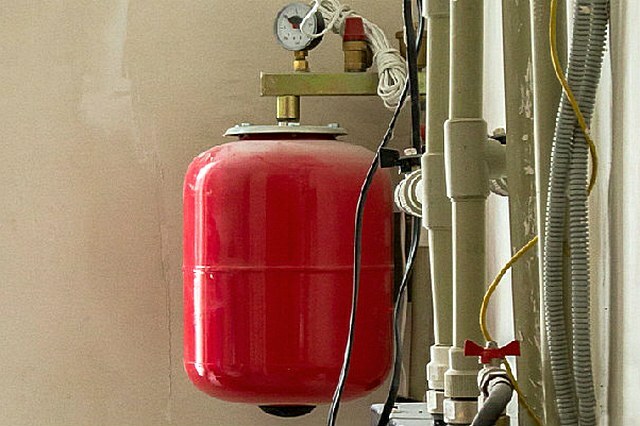 Closed expansion tanks for heating are usually painted red. There is a membrane inside the tank, it is made of rubber. Essential element for maintaining the pressure in the expansion tank

The expansion tanks with diaphragm can be produced in the form of a hemisphere or in the form of a balloon. Which is quite suitable for use in a heating system with a gas boiler. We recommend that you familiarize yourself with installation features closed type tanks.

Advantages of membrane types of tanks:

Gas attachments are usually equipped with an expansion tank. But the additional tank from the factory is not always configured correctly and can immediately turn on in the heating operation.

Air pressure in the expansion tank

The indicator of air or nitrogen pressure in the expansion tank for different gas boilers will not be the same, it all depends on the type of equipment and design features. The standards are indicated by the manufacturer in the product passport.

Typically, the pressure in the new damper tank is 1.5 atm. But this setting may not be suitable for a specific heating system. Factory settings are easy to reset. For these purposes, there is a special fitting in the expansion tank housing (for some manufacturers it is a pumping valve), through which the air pressure is adjusted. 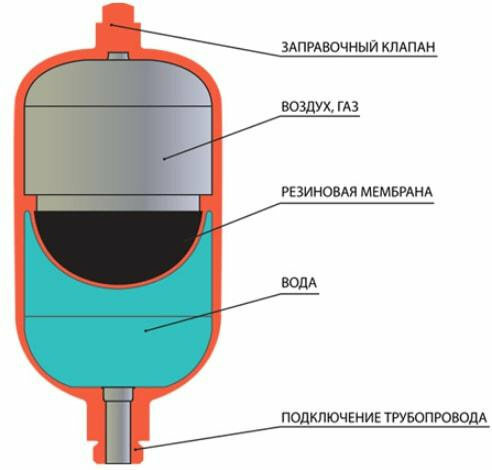 The nipple is located on the side of the cylinder air chamber. With its help, you can release excess pressure or, conversely, pump up the tank

For the normal functioning of a gas boiler, it is necessary that the pressure in the membrane tank is 0.2 atm less than in the system itself. Otherwise, the heated water that has increased in volume will not be able to enter the container.

In small houses and apartments for closed heating systems, the pressure in the expansion tank is usually permissible in the range of 0.8-1.0 bar (atm). But not less than 0.7 bar, since many gas boilers have protection and the device simply will not turn on.

Check the tank pressure level every year. If jumps are noticed pressure in the heating system, which means that air has escaped from the damper tank and must be pumped up.

How to set the optimal pressure?

There are pressure gauges on the heating system, with the help of which the pressure in the circuit is monitored. On the expansion tank itself, there is no fitting for the installation of the measuring device. But there is a nipple or spool for the release and pumping of air or gas. The nipple is the same as on the wheels of cars. Therefore, you can check the pressure level and adjust it using a conventional car pump with a pressure gauge. 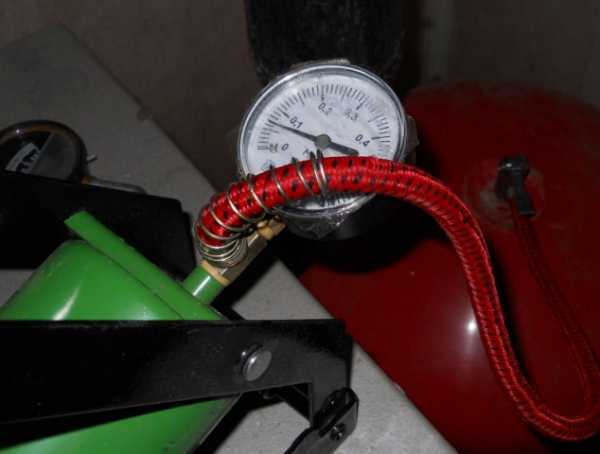 For pumping air into the expansion tank, even the simplest car hand pump with a pressure gauge or an automatic compressor is suitable.

Before releasing excess pressure or pumping air into the expansion tank of a domestic gas boiler, it is necessary to prepare the system. The car pressure gauge shows the value in MPa, the data obtained must be converted to atmospheres or bars: 1 Bar (1 atm) = 0.1 MPa.

It is possible to check the correct adjustment of the air pressure when the boiler reaches operating parameters. 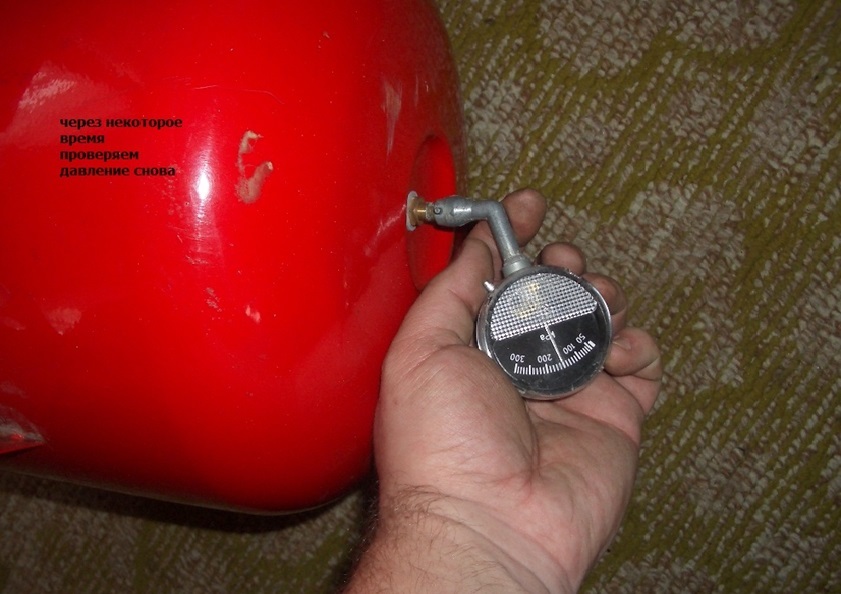 If the tank is inflated correctly, then the gauge needle of the device during measurement will show a smooth increase in pressure without any jumps and jerks.

And with underestimated pressure readings of the compensating tank, the water will simply push through the membrane and fill the entire tank. As a result, when the temperature of the coolant rises, the safety valve will work.

Sometimes in double-circuit gas boilers, fuses are triggered even with the correct setting of the pressure of the built-in expansion tank. This indicates that the volume of the tank is too small for such a heating system. In this situation, it is recommended to install an additional hydraulic tank.

Appointment of an additional tank of a double-circuit boiler

As a rule, built-in expansion tanks in gas boilers have a volume of about 6-8 liters. They are designed to compensate for the expansion of 120 liters of heating medium circulating in the heating system. Under normal operating conditions, such an expansion tank is enough for a small apartment or house. 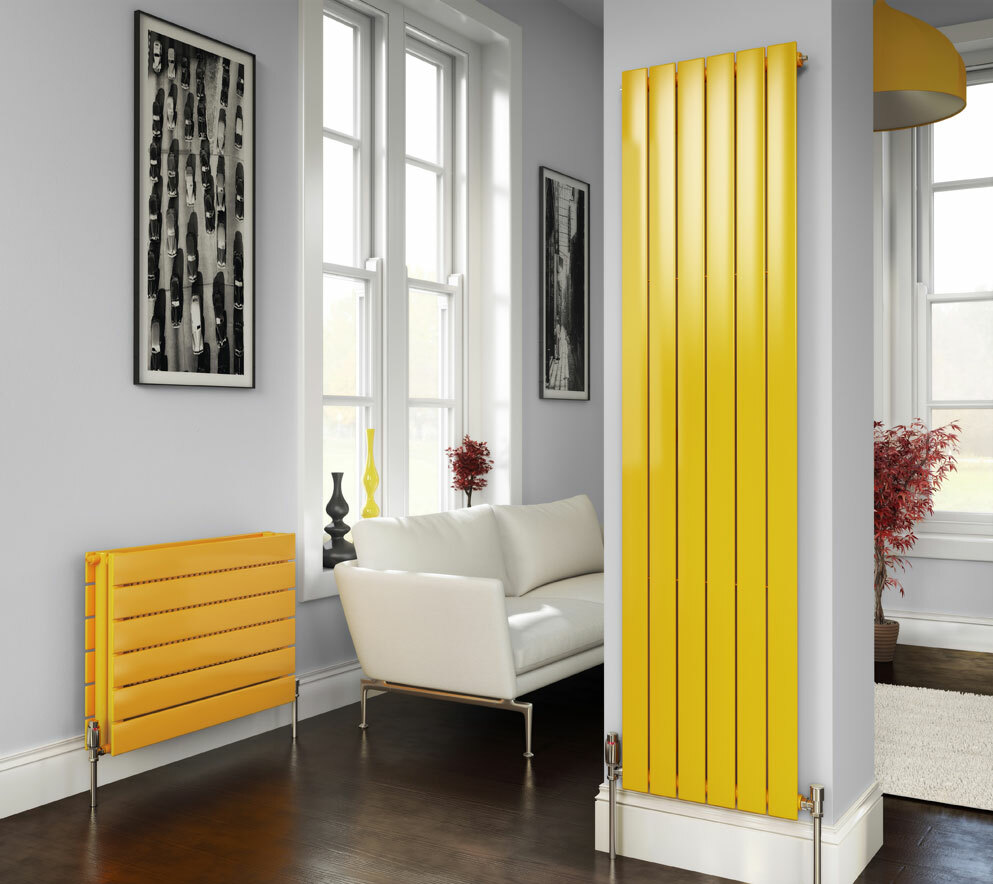 When installing radiators of non-standard shapes and sizes, the heating system must be equipped with an additional expansion tank. Since these batteries hold more water

If the heating area is large, set warm floor or there are many radiators in the rooms, the volume of the standard built-in tank will be small, since more water is used.

When heated, the excess coolant completely fills the tank. And since there is no free space in the tank, the water pressure increases in the heating system itself and an emergency discharge occurs. safety valve. After that, the gas boiler will hardly be able to automatically turn on.

To avoid such negative consequences, an additional expansion tank with a membrane is installed in the heating system in the design for a double-circuit gas boiler. When the standard tank is full, the water will drain into the spare hydraulic tank. After cooling, the liquid returns to the radiators.

Calculation of the volume of the expansion tank

It is not difficult to ensure the stable operation of the heating system, the main thing is to choose the right volume of the expansion tank. The calculation of the volume of the expansomat should be made taking into account the most intensive operation of the gas boiler. At the first starts of heating, the air temperature is not yet very low, so the equipment will work with an average load. With the arrival of frost, the water warms up more and its amount increases, requiring more additional space. 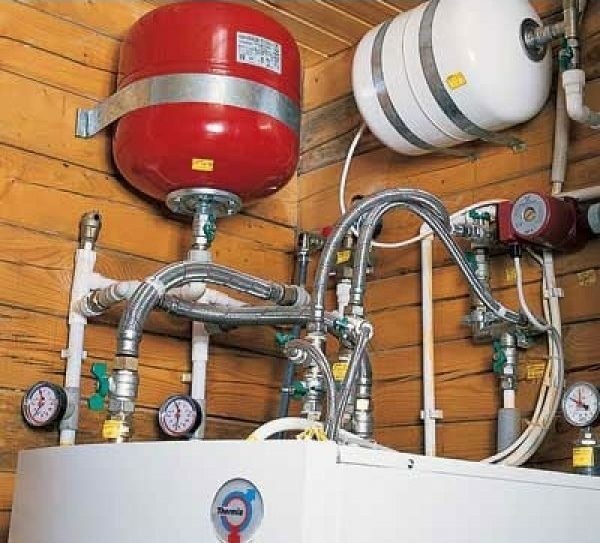 It is recommended to select a tank with a capacity of at least 10-12% of the total amount of liquid in the heating system. Otherwise, the tank may not cope with the load.

You can independently calculate the exact capacity of the expansion tank. To do this, first determine the amount of heat carrier in the entire heating system.

Methods for calculating the volume of water in the heating system:

After the amount of coolant has been calculated (example: 25 kW * 15 = 375 liters of water), the volume of the expansion tank is calculated. 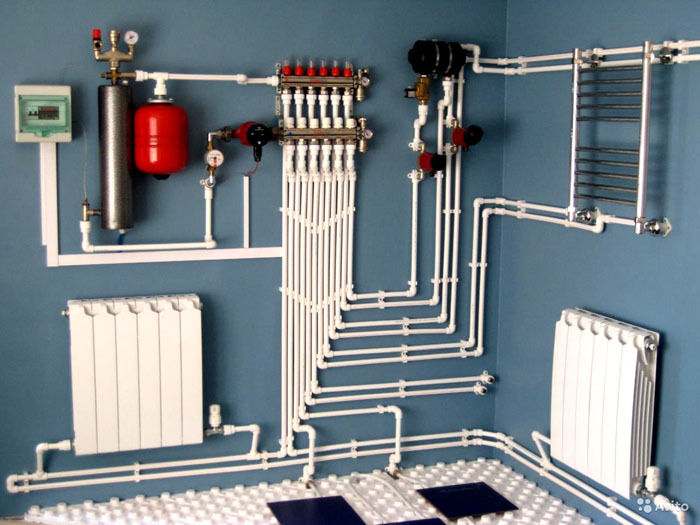 There are many methods, but not all of them are accurate and the amount of water that can fit into the heating system can be much larger. Therefore, the volume of the expansion tank is always selected with a small margin.

The calculation techniques are quite complex. For one-story houses, use the following formula:

The indicator of the efficiency of the tank is obtained by the formula:

And although the double-circuit gas boiler already has a built-in tank for 6-8 liters, but looking at the results of the calculations, we understand that the stable functioning of the heating system without installing an additional expansion tank is not work out.

You can learn how to independently calculate the volume of the hydraulic tank and adjust its pressure by watching the videos below.

An easy way to determine the volume of the expansion tank:

Instructions for self-adjusting the pressure level in the expansion tank:

Gas boilers must be equipped with expansion tanks. They "absorb" the excess of the heating medium and prevent the formation of air pockets. In double-circuit types of equipment, such devices are mounted, but often their volume is insufficient for trouble-free operation of heating.

The choice of expansion tanks should be based on the pressure and volume of the coolant in the system. It is important to properly adjust the tank, otherwise it will not be able to ensure the uninterrupted and stable operation of the gas boiler.

Do you have any questions about pumping and adjusting the pressure in the expansion vessel? Ask it in the comments block - our experts and other site visitors will try to help you.

How to make a stove in the waste oil with your own hands: options and examples of the manufacture of the stoveHeating Equipment

During the work of any mechanisms use technical oils. During use for their intended purpose, they are not burned and retain their flammability. Instead of recycling, an alternative option for thei...

Due to improper operation, temperature changes and pressure surges in the operation of autonomous heating systems may fail. Negative consequences in such situations are critical: starting with the...

Binding of a heating boiler with their own hands: schemes for floor and wall boilersHeating Equipment

Heating boiler binding is a system of pipelines and equipment designed to provide radiators with coolant. Simply put, this is all but batteries. Do not be afraid of the abundance of pipes, devices...