How to make a cardboard safe: selection of materials and tools, manufacturing process

Nowadays there are many different services, online stores, offering a huge number of different products. Quite popular today, the safe, invented back in the 19th century, was created in England, and was intended to save jewelry. However, now little has changed.

To buy even the cheapest and not the most reliable safe will require a lot of costs, but making a safe with your own hands, without spending a penny on it, is quite simple. All you need is a couple of cardboard boxes, a little wit and some free time. Such a safe, of course, will not save your jewelry and money, but it will serve as a decoration and surprise for guests.

In general, there are many ways to make safes. These can be safes with a push-button digital code, circular digital code. Taking a real model of the safe as a basis, you can easily make a replica of it.

In this article, you will learn how to make a safe yourself, what materials are required for this, and what are the features of making a homemade safe. Let's get started!

We will make the simplest digital safe.

What materials and tools are required to make a cardboard safe

Let's start with the material. To make such a product, we need:

How to make a safe out of the box? To get started, draw a sheet of A4 paper in a crisscross pattern and cut it along the outlined lines with scissors.

Now take a pencil and wrap one cut piece of paper around it, then secure the resulting tube with tape and take out the pencil.

Take the next piece of paper you cut out and wrap it over the previous tube.

Do the same with the third piece, wrap it around the second resulting tube.

This will give you three tubes of the same length but different widths (reminiscent of a 19-20 century magnifying tube). 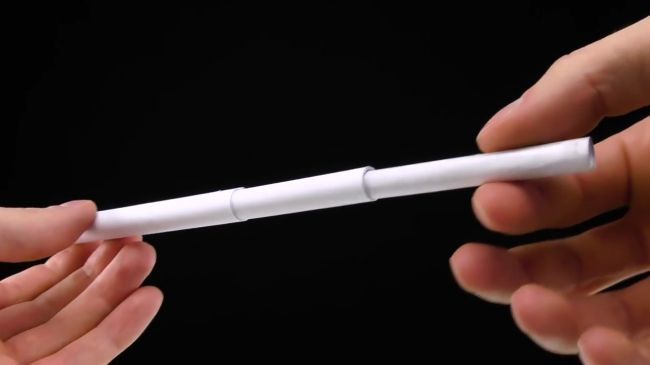 Next, take a piece of cardboard and a pair of compasses, and draw three identical circles with a diameter of 3 cm.

Cut out the resulting circles with scissors or a utility knife.

Take an 8mm drill bit, then drill all three circles in the center. 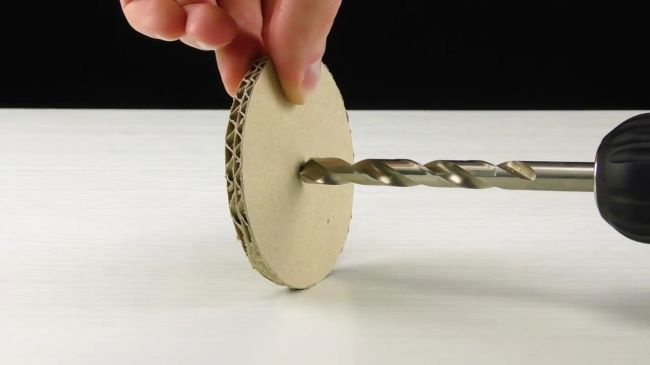 Use a clerical knife to make an incision as in the photo.

After the operation performed, small pieces of cardboard will remain. Take scissors or a clerical knife and cut four pieces of 1.5 by 1.5 cm, then using glue glue them to the circles made earlier (to one of the circles, glue two pieces of squares from different sides).

Now take the widest tube, made in advance, and cut off two even pieces 2 cm long from it. 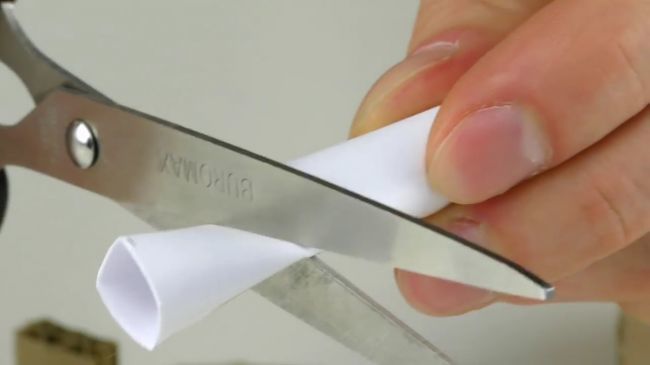 Next, insert them into the center hole of the previously made circles and fix with hot melt glue.

Insert the thinnest tube into the remaining cardboard circle and fix with hot glue. 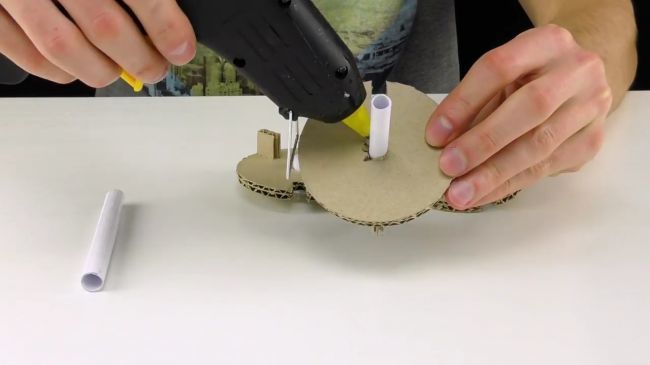 On one end of the thin tube we put on the remaining tube of medium thickness, after which we put the remaining two circles with a thick tube in the center on the middle tube. The result should be as shown in the photo.

The main thing is that all the squares on the circles are turned towards the inner side of the mechanism.

Now you need to cut two identical pieces 10 cm long on both sides.

Then take a wooden ice cream stick and cut off the round ends.

Fold the pre-made parts together, then cut evenly with a knife.

Move the prepared parts to the length of the cut ice cream stick and insert the stick itself into the cuts.

Next, take two wood skewers and insert them, as seen in the photo.

Take a piece of cardboard and cut out a piece 30 cm long and 15 cm wide.

Cut two pieces 12 cm long and 2 cm wide and clamp them to the sides of the large piece, but so that 2 cm is left from the edges.

Then make another piece 28 cm long and 7 cm wide and glue it in the center between the side strips.

Make a piece 23 cm long and 7 cm wide and fix in the center on the previously attached strip.

Cut out three rectangles 7 cm long and 4 cm wide and attach them as shown in the photo.

Prepare two pieces 7 cm long and 2 cm wide and glue them together as in the photo.

We make another rectangular piece of cardboard 30 cm long and 25 cm wide and fix it as in the photo.

Drill two identical holes as shown in the photo.

Insert the mechanism prepared earlier into the large hole.

Insert the end of the corner piece skewer into the shallow hole. 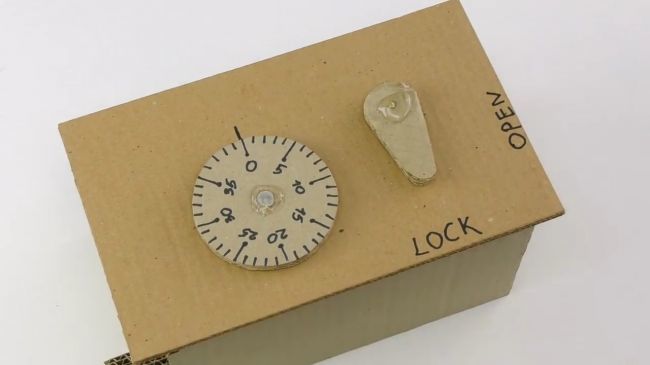 Cut out the same second rectangle and do the same as with the previous one.

Prepare two side rectangles and close the mechanism from the sides.

Using a compass, draw a small circle, then cut it out and use a marker or pencil to draw out the numbers.

Apply hot glue to the front side of the mechanism, after which, after cutting out the part with sides 30 by 25 cm and cutting out two holes for the tube and skewer, fix it.

Then take a piece of cardboard and cut out a handle-shaped part from it for your safe (the part can be anything).

Now make the markings on your safe as shown in the photo.

A do-it-yourself cardboard safe requires a code. To do this, turn the circle with the markings counterclockwise until one of the cutouts on the three circles in the mechanism coincides with the wooden skewer.

Now write the number resulting from the intersection with the markings on the circle.

Do the same with the rest of the circles, rotating them in opposite directions and rewriting the numbers to match the cutouts.

Once you've copied all three numbers, this will be your safe password.

Now let's get down to the wireframe. Make a box of any shape, then insert our mechanism into it, as you can see in the photo.

It remains only to put a few bills from the joke bank there and give it to your children. It will not be possible to open the safe without a code without deforming the structure. Such a safe looks rather unusual and will serve as a vivid proof of how a real safe works.

How to make a paper safe? If you like such a homemade product, you can make exactly the same model, but out of paper, wood, or even metal.

Island in the kitchen: pros and cons, photos, tips and tricksFurniture

It takes ~ 3 minutes to readInterior fashion does not stand still, from year to year offering interesting options for the arrangement of houses and apartments. Relatively recently, designers have ...

Hanging shelves for the kitchen: selection rules, do it yourselfFurniture

Wooden countertop for the kitchen: do it yourselfFurniture

It takes ~ 3 minutes to readAn expressive amber color, a surface warm to the touch, an ancient tradition of processing, an affordable price - all these qualities have secured the leadership of woo...