How to grow radishes, its varieties, useful properties

How to grow the most common radish? A small vegetable, but with very useful properties. She pleases gardeners with her harvest much earlier than other vegetables, as she appears on our beds almost the very first. The number of varieties, varieties, colors of this useful root crop is amazing: scarlet, white, yellow, burgundy, purple radish.

This vegetable grows quickly, together, but sometimes the cultivation of radishes causes difficulties, then the experience of others can be convenient. She will not only bring a rich palette of colors to various spring-summer salads, but will provide each of us with a daily dose of ascorbic acid.

Notice, only one bunch - 8-10 pieces - will provide half the daily requirement of vitamin C. In China there is a saying: “If there is ginger in winter, and in the summer - radish, then you will keep healthy all year".

Radish contains silicon. She is in second place on the content of this element. The first place is occupied by Jerusalem artichoke( earthen pear).Silicon supports our muscles in a tone.

By the way, this small root vegetable contains anthocyanin, a bioactive plant pigment that is very useful for people suffering from cardiovascular diseases. It is anthocyanin that gives many varieties of radish a beautiful red-pink color. It gives it hemostatic, anti-inflammatory properties. Anthocyanin helps to increase the elasticity of small blood vessels, their resistance to harmful environmental factors.

Studies by American scientists have shown that anthocyanins contained in radishes are able to halt the growth of colon cancer cells.

And if you want to lose a few extra pounds, then your menu must contain radishes.100 g contains only 14 kcal! With such data to grow fat, eating it, no one will succeed. Radish improves the body's metabolism, and also prevents the deposition of fat. It enhances intestinal motility, removes harmful substances from the body, along the way superbly splitting fats.

By the amount of fiber, radish is equal to garlic, beets, tomatoes, cabbage, radish, turnips. Due to this well removes from the body cholesterol, toxins.

Also, the root vegetable helps the structure of cells in the body. The protein content in it is 2 times more than in tomatoes, squash, zucchini, eggplant. In addition, the protein contained in it is extremely useful.

Radish is ideal for diabetics because it stabilizes blood sugar levels. This is just a seemingly so small vegetable. In fact, this root vegetable is a big hard worker who successfully delivers the most important vitamins to our body.

Can Radish Harm? Who shouldn't they get carried away? It should be used with caution in people with gastric ulcer, with diseases of the gastrointestinal tract, since the essential oils contained in it will irritate the mucous membrane, can lead to complications.

Experience in the cultivation of radish

I will tell you about one last year's experiment in the cultivation of radishes. I have not planned any experiments. Just in the early spring, as usual, I sowed it. But the spring was dry, without rain. Even before the fall, there was almost no rain, and the winter was snowless. That spring was dry, windy weather. The soil dried quickly. Radish is such a culture that will not grow in dry land.

So when I sowed it, I poured the earth well. And after the sprouts appeared, they had to be watered every day, sometimes even twice, since the wind dried the soil very much during the day and night. In addition, we had to daily loosen the ground, as the wind, the sun dried the soil - a crust quickly formed on the surface.

I was no longer glad that I sowed it at all. Well, imagine how many different things are in the garden in the spring - the amount of garden work in March-April increases exponentially, and here you have to “dance” almost every day around radishes.

I had two beds planted with radishes. One bed was next to a barrel with a supply of water, and the second at the very end of the garden - there only a hose could deliver water.

I tried to simplify this work for myself: I covered the seedlings with a spunbond( nonwoven covering material) so that it would delay the evaporation of moisture. She stuck metal arches along the edges of the bed. For strength, she tied them in the center with a string. From above pulled spandbond. The edges of the coating are secured with large stones, bricks so that the wind does not blow it.

It should be clarified that spunbond, like any nonwoven cover( agrospan, lutrasil, etc.) has a different thickness. I had previously bought, already used on other cultures in past years, two types - spanbond-17 and spanbond-30.Spunbond 17 is a very thin, lightweight shelter — through it you can see how the plants develop. Spunbond-30 - twice as thick - that there, as it grows, is not visible. For radishes, I used spunbond 30 - it holds moisture better, I think.

How good is this coverage? No need to open, as a film, to air. But I was too lazy. She covered only one bed. She left the one near the barrel open; after all, it was not necessary to carry the watering can with water.

The far bed well flowed the last time before the shelter - no longer poured. The coating transmitted sunlight well, but also retained moisture well. I opened the cover two times - only in order to pull out some weeds, to thin out the crops of radish.

And what results did I get with this unplanned experiment?

Radish under cover has grown much larger, juicier - the most amazing for me, ripened for five days earlier. And for him, five days is quite a long time; after all, the growing season is so small. Even on the leaves, it was noticeable that under the shelter it was more magnificent than without it. Apparently spandbond supported a certain microclimate on the garden - moisture came not only through the roots, but also through the tops. And I still watered the garden near the barrel every day, the soil on it practically did not dry out.

Conclusion, I think you can do. Radish under the shelter - it's just a godsend for the gardener. Labor costs are reduced much, and the harvest pleases.

Mercado. Very tasty root vegetables. Bright red with a thin spine. The diameter of the fruit reaches 5 cm. The weight of each is approximately 25-30 g. All root vegetables are the same, even, as per selection. The yield of radish varieties Mercado - 3-4 kg per square meter.

Octave. Mid-season variety. Ripens in 30 days. Wonderful, snow-white, rounded radishes( weight about 25 g) with dense, slightly oily flesh have an excellent slightly sharp taste. The variety is super resistant to cold weather, dry weather. Return crop - very friendly. It can be stored in the refrigerator for up to 3 months after harvest, without losing elasticity and taste.

Carmelite. Fiery red large root vegetables with white juicy, tender pulp, weighing up to 30 g. This variety of radish will linger for a long time on your beds. Harvesting is possible within three weeks after germination. The variety is absolutely indifferent to the vagaries of the weather. Resistant to tsvetushnosti. Can be grown in partial shade. Productivity - up to 5 kg per square meter.

Growing carrots for me, for example, is preparing for the arrival of a granddaughter. She likes to "shuffle" her right at the dacha. As the site for this, as, indeed, under many cultures, it is ne...

Planting beetroots (Burak, Buryak) is often not always successful for beginners - seeds grow poorly or root crops grow small. And after all, it is one of the first among vegetable crops in terms o... 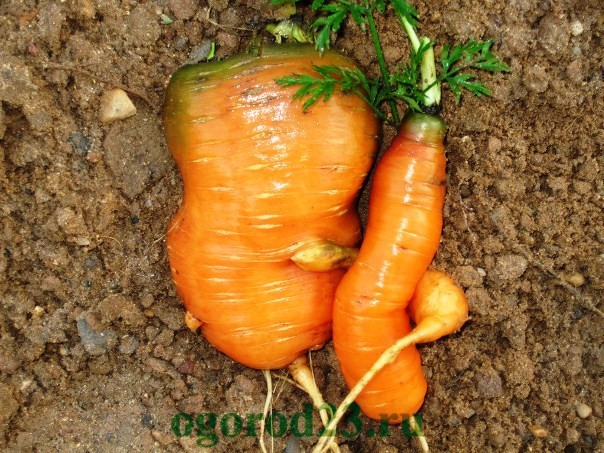