A selection of the best recipes for roasted turkey 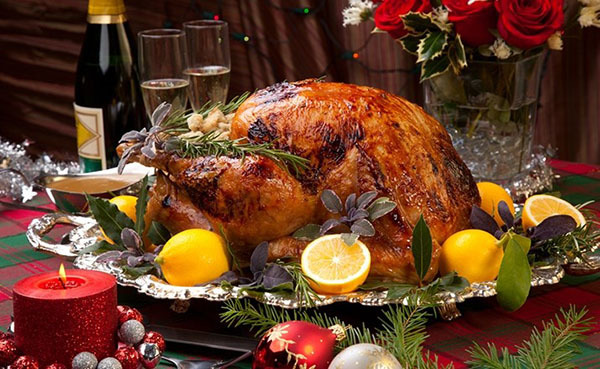 An oven-baked turkey is a classic Thanksgiving recipe. Such meat is considered dietary and can serve as an excellent alternative to the usual chicken. It is cooked with vegetables, fruits or simply baked in the sleeve. Traditionally, turkey is served with spices and spices, and mashed potatoes are used as a side dish.

Shin of turkey in the sleeve

Shin is the most juicy part of poultry meat. To prevent it from becoming dry, use a special sleeve. He creates all the conditions so that the meat is soaked with spices and spices and at the same time remains soft. A great option to bake a turkey leg is meat in a sleeve with a simple homemade marinade.

For 2 servings( 2 medium crus) you will need a few tablespoons of mayonnaise, garlic, salt and black pepper to taste. Also prepare the sleeve and baking tin. For registration and submission, take bright fresh vegetables and herbs, prepare potato chips or mashed potatoes. Turkey baked in the oven in the sleeve, cooked for 60-90 minutes:

This is one of the easiest recipes for turkey leg baked in the oven. The whole process takes no more than one and a half hours, of which 60 minutes the meat is baked. Do not be afraid to experiment - turkey goes well with many spices, vegetables and fruits.

Turkey fillet in kefir sauce with cheese and tomatoes

This recipe for a turkey baked in the oven will impress even the most strict gourmets. It is better for him to take a breast or fillet - the white meat is drier than the rest of the poultry, but well absorbs sauces. For 1 kg of poultry, 200 g of hard cheese, 0.5 l of kefir, 1-2 fresh tomatoes, lemon juice, salt and spices to taste will be needed. The best mix of Provencal herbs.

This way of baking turkey fillet in the oven in foil is already a full dish. Due to melted cheese and a large amount of marinade, the meat is nourishing and high-calorie. It is served without sauces, with a vegetable side dish.

How to bake turkey breast

For the simplest recipe for turkey baked in the oven, you will not need any foil or baking sleeve. Its main feature will be homemade flavored sauce, made from the available components. The bird turns out fragrant and juicy, but dietary. Cooking time depends on the size of the piece of meat - if you put a whole carcass baked, it will take at least an hour and a half. Breast, leg or thigh turkey, baked in the oven, you can get it in 30-40 minutes.

For 1 kg of poultry you will need several tablespoons of mustard, 3 tablespoons of vinegar and olive oil( can be replaced with any vegetable), salt and black pepper, and a mixture of spices and Provenan herbs. Also take fresh garlic to taste.

Read also: How tasty and useful to cook a rabbit?

Turkey breast made according to this recipe is very fragrant. The main thing - do not overdo it with seasonings. Meat should not only smell good, but also preserve its original tender taste. Before serving, decorate it with fresh herbs, put on lettuce leaves.

Fillet baked in a sleeve with sour cream sauce and oranges

One of the most unusual turkey recipes is pulp cooked in a sleeve with homemade sour cream sauce and fruit. Such an original combination of tastes is remembered for a long time and will please even the most demanding gourmets. The only drawback - in the recipe there is sour cream and butter, so it can not be called low-calorie. For the daily menu, the recipe is not suitable, but will decorate the table for the winter holidays.

For 1 kg of poultry meat you will need 100 ml of sour cream, a spoonful of olive and butter, 1 medium orange, mustard, salt and spices( rosemary, thyme, black pepper), as well as several large garlic cloves.

A turkey drumstick baked in the oven, white meat or thigh is prepared using the same recipe. It is also suitable for baking chicken.

Turkey fillet is the most dietary part of it. Such meat is suitable for a festive table, and for a diet dinner. The main thing is to cook the bird correctly so that it does not turn out to be dry. For this, the recipe will contain not only turkey breast, but also juicy bacon.

Turkey fillet baked in bacon in the oven, prepared from a minimum set of ingredients.700 g of poultry meat will need 300-350 g of bacon or bacon, as well as spices, salt and lemon juice. For this recipe, a spice blend is suitable for turkey or chicken.

If the shape of the rolls is important, fasten them with a regular thread. When they are ready, just remove the leftovers.

Breast of turkey, baked in the oven properly, will be juicy and fragrant. Serve it with potato side dish and vegetables. Despite the fact that the fillet is a dietary product, fat or bacon adds calorie to the dish. It turns out very satisfying, so it is better not to add sauces to it.

Read also: The best recipes for delicious wine from grapes at home

Recipe for turkey in a multicooker

Turkey, baked in a slow cooker, is one of the easiest recipes. There will be no need for sauces and marinades, the taste of meat will be emphasized by several peas and vegetables. The dish will turn out really dietary and will be suitable for a daily diet. Its preparation will take no more than an hour. For 400 g of turkey meat, take a spoonful of vegetable oil, 1 carrot and 1 medium onion, as well as salt and pepper to taste.

Every day, try not to use a large amount of spices and seasonings. Turkey meat is tender and juicy in itself boiled or baked.

Turkey is one of the most useful types of meat and poultry. It is destroyed to use on a diet and add to the diet for diseases of the liver and gastrointestinal tract. In the network you can find a huge number of turkey recipes in the sleeve or in foil, with vegetables, fruits, dried fruits or sauces. The best way to find the most delicious recipe is to listen to your own tastes and cook an original author's dish.

Content: . GrantAppetizing treats for the long-awaited celebration of When spring is outside and the soul wants to have fun, many people come to mind to ...

How to cook green beansRecipes And Blanks

Content of the article: Quick recipe of rice casserole The most delicate sweet bread products with a cup Among the many dishes, rice casserole is on...