3 ways to grow tomatoes: in buckets, according to the method of Kizima and under the covering material

A tomato has long been recognized as a favorite vegetable by gardeners; it is grown under different weather conditions. The key to a good harvest both in the open field and in the greenhouse is seedlings, which not everyone likes to grow. The easiest way is to plant purchased bushes, but there can be many different nuances. After all, not always you can buy quality seedlings that will fully meet the desired criteria. It is best to grow tomatoes for seedlings on your own, then you will know exactly which fertilizers are applied and which ones should be added.

Nowadays there are so many different ways and methods to plant vegetables. Not deprived of attention and tomato. He was especially loved and most of the experiments were performed on him. They are engaged in its cultivation both in a bucket, and in paper, and even under a film.

Popular Planting and Cultivation of Tomatoes

Each gardener can share his own, known only to him the secrets of planting and growing tomatoes. We will consider the most popular and well-known methods, the application of which is known to many.

Most growing methods are based on space saving, not everyone has a wide window sill for growing seedlings, or reluctance to tinker with seeds and picking up seedlings. It was with these promptings that experiments with seeds and ready-made seedlings began:

. Perhaps the best-known non-standard method of growing tomato seedlings in a city apartment is the Galina Kizima method. The basis is the minimum possible use of the soil and the complete saving of space during the germination of tomato seeds. The so-called "swaddling" is quite effective, this method can be used to grow other vegetables.

Sprouting seeds can occur without soil, the process proceeds perfectly on toilet paper.

To do this, several layers of regular toilet paper are spread on polyethylene and moistened with a spray bottle. On it lay the previously soaked tomato seeds, the distance between each seed should be at least 1 cm, from the edge indent by 2 cm. After the seeds are covered with several layers of paper and also moisten it.

Preparation of paper tape for seeds

.bright and warm place. After the seedlings appear and the plants get a little stronger, they will have to be “transplanted” into separate diapers.

For this, pieces of square-sized polyethylene with a side of 20 cm are used. Ground is poured into the center of the square, and a seedling is placed in it so that all the leaves are above the polyethylene. After turning the bottom edge, and then the side so as to get a tight roll. The soil before this is plentifully watered, and then not moistened for 10-14 days.

The seedlings grown by this method do not require picks, the stems are strong with a lot of leaves, but the rhizome develops poorly. After the appearance of the third pair of these leaves, tomato seedlings are planted in a greenhouse.

Transplant plants by transfer, with the hole being as large as an earthen clod around a rhizome. Further cultivation is carried out completely without moisture.

Before planting, it is necessary to cut off several lower leaves, and lay out the seedlings with the tops strictly to the north. Before that, a glass of wood ash and a pinch of potassium permanganate are put into each prepared well, everyone is poured with a bucket( !) Of water, and only when the water is absorbed do they start planting plants.

Cultivated seedlings of tomatoes and seedless way under a covering material or film. As soon as the earth warms up a little, they prepare a bed. Loosen the soil, make there fertilizer, moisturize. Prepared and processed seeds are sown in shallow grooves, maximum 1 cm. Grains are sprinkled with a layer of soil, watered with warm water and covered with .Agrofibre or polyethylene can be used as a covering material. In this way, a greenhouse effect is created, in which the soaked grains sprout much earlier.

Seeding of seeds is carried out at a sufficient distance from each other, since transplantation is not performed with this method.

The method of growing under a covering material is designed to save time, it is used more in the southern areas and the middle lane.

. The method of growing in buckets.

. Cultivation of tomatoes in buckets according to gardeners gives much greater yields. Repeatedly conducted experiments in this regard, which confirmed this fact. The method is suitable for greenhouse cultivation, in open space, tomatoes are not so plentiful fruit.

It is already impossible to determine exactly who initiated this method of cultivation. They began to use it because of the lack of a seat for grown seedlings .In a bucket they collect a mixture of soil from the plot and compost, plant a tomato sprout, and water it plentifully. During the entire period of growth before fruiting, as it dries, the soil is periodically watered, and during the formation of the ovary, watering is increased. The method allows to significantly extend the fruiting period of any variety, while growing vegetables is possible not only in the greenhouse, but also on the balconies and loggias.

There is an officially registered method, for which initially prepared buckets with soil mixture are used. It is worth noting that according to the recommendations, the container should be dug into the soil by 25-30 cm.

With this tomato cultivation, it is important to carry out a comprehensive sub-feed of booms three times. Fertilizers in liquid form must be poured directly under the root, it is important to ensure that moisture does not fall on the stem and leaves of the plant.

The described methods are recognized as the most common and effective for growing tomatoes under different weather conditions .Their effectiveness is confirmed by novice gardeners and specialists in this case.

You can plant and grow tomatoes and other vegetables under any conditions. This can be done even when there is a catastrophic lack of space in the garden or there is none at all. To do this, just enough to exactly follow all the instructions and tips. 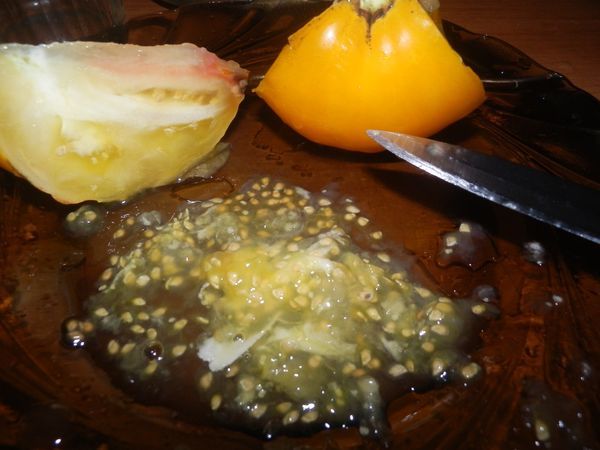 Full description and characteristics of the variety of tomato Honey SpasTomatoes

Each gardener seeks, planting on his site different varieties of tomatoes, to find resistant to weather changes, high-yielding with good taste. That is what Honey Spas is, the description and cha...

To date, thousands, if not tens of thousands of varieties and hybrids of tomato have been bred for any size, taste and even color. How to choose from this abundance what will bring a high yield a...

Tomato cultivar Stolypin - excellent tomato culture. It is considered one of the new ones, but has already managed to gain popularity among many gardeners. Choosing for cultivation tomato novelti...