Florovit for blueberries, properties and features of the application

In my summer cottage along the backyard I grow blueberries. Last year, noticed that the leaves on the bushes began to redden. Familiar advised to feed them Florovit. Tell me how to properly apply the Florovit fertilizer for blueberries in the garden?

The fertilizer Florovit intended for blueberry contains a whole range of trace elements necessary for the active development of the plant. It comes in the form of granules, which dissolve well in the soil, and is used for root dressings. The Golubika is very demanding to the composition of the soil, at high acidity the plant produces few young shoots, and the leaves turn yellow and fall off. However, its low level also negatively affects plantings - the leafy plates begin to acquire a red hue. Florovit's fertilizer was created specifically to avoid such a situation. The drug levels the acidity of the soil, if necessary, acidifies it and creates ideal growing conditions for blueberries.

The fertilizer contains microelements in a form that prevents them from rapidly washing out.

Features of the use of the drug

In the garden and in the garden Florovit is used to fertilize blueberries by direct application of the drug to the soil. During the growing season, fertilizer must be applied 3 times with a break of 1 month. The first dressing to spend in April. To scatter the granules around the blueberry bushes, carefully put them in the soil and pour them abundantly. The rate of introduction in the first year of cultivation is 20 mg of the drug per 1 square meter.m. In subsequent years, for feeding, the rate should be increased by 1.5 times( to 35 g).

Young seedlings are recommended to be fertilized not earlier than two weeks after planting.

The last seasonally feeding must be done no later than mid-June( before the 15th).Otherwise, the shoots will not have time to mature before the onset of winter. If blueberries are fertilized after a specified period, the bushes will actively grow, releasing more and more young twigs, which will freeze in the winter anyway. In addition, a weakened bush may completely die and not suffer the winter.

Read also: Humic fertilizers: is there any harm to humans?

Effect of the drug

As a result of the application of Florovit in the cultivation of blueberries:

Florovit is absolutely safe for the environment and humans and does not contain harmful impurities.

How to acidify the soil under blueberries by folk methods - video 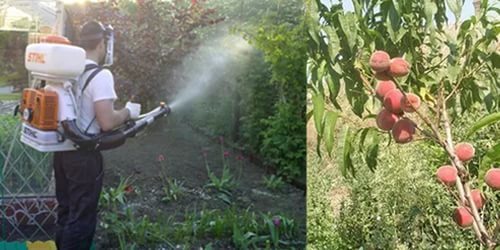 Content of the article: Characterization of the drug Features of the use of the drug Peach processing Delan Diseases and pests of the peach: how to save the tree -...

Tell me how to use bird droppings to fertilize vegetables( tomatoes, cucumbers, potatoes)?Can I add it to the hole when planting? The timely introduction of nutrients is the ...