Wiring diagrams the flow switch with two or three places

Switching lights on the principle "came, I turned on - went and turned off" - is one of the variants of the effective use of electric energy. The functionality of such a control system is provided by the same traditional devices - switches, but structurally somewhat modernized.

Switching modernization allows you to switch the flow connection with two or three seats to control the light source of each individual point. Agree, this solution is particularly useful for the length of the room, such as a corridor.

We offer to understand the principles of connecting the flow switch on the two and three control points. The article shows the operating scheme of the organization of groups of light, but also describes the features of the implementation of switching projects.

The logic of power savings spent on light fixtures or other, it is due to the simple user actions.

If the light unit is needed, electricity is supplied to it by a simple contact closure switch. In another case, the opposite effect.

However, suppose that the premises (residential or other purposes) pass. Then the user devices include light at the entrance, but leaving the room through another door, no longer will be able to de-energize the circuit. There is irrational use of electricity.

But the situation is easily corrected. And to do this will connectivity option flow switch with two flat seats for pass encoding scheme.

Long corridors of premises for different purposes - potential targets for the unit light source control systems from different places. It is the operation of such facilities should edge pressing issue energy saving

For example, there is a room with a functional purpose - the corridor. Management is required to make a general group of lamps premises of two points - the first (entrance) and second (entrance) door.

Lighting project corridor consists of two groups of light, so it is logical to apply in this case, to control the two dvuhklavishnyh switch.

Accordingly, in addition to it will require:

Footage of electrical conductors should be calculated after drawing diagrams and wiring layout. It is recommended to purchase a cable with a small margin.

Phase conductor is brought to dvuhklavishny device PV1. This switch having the configuration of two keys, respectively, has two common terminals of contacts and four terminals of changeover contacts.

There are still two terminals on the second pass-through switch. Both - the general (common), and they are joined by the principle: each one light group (L1 and L2) lighting system. Already groups emanating from the light conductor circuit is closed to zero the electric bus network.

But this is only one possible circuit design. So, if you are using a light band can be arranged on the one-button circuit breakers.

Wiring using one-button-through switches is more economical in terms of material consumption. It requires fewer wires, since almost doubled compared to the previous solution, reducing the number of trunks.

But, at the same time, it is limited to the functionality of the lighting system itself.

However, this option can be used most often for the device as part of living quarters.

What is required for a device management system in one-button switch?

The answer is obvious:

Example of wiring devices for residential premises from the category of standard designs. There are two one-button switch. The decision fulfilled in view of the cable wiring to the grounding conductor (PE). This embodiment corresponds to the circuit shown above

Then diluted with cable connections and run-through switches of two places to the light source via a junction box.

Phase conductor plant for PV2 common terminal and the common terminal PV1 is output to one terminal of the light band. The second contact group coupled light with a zero bus, and changeover contacts of both switches commute observing identical numbering (1, 1, 2 with 2).

The decision on the three control points;

Organization passage switching systems is largely determined by the area of ​​space (length), the number of turns (door). Therefore it is not excluded the use of schemes with passage control switches with three or more places.

Construction of such circuits is generally done with so-called cross switch.

This is the same switch, but the circuit engineering execution made five contact terminals, two of which are short-circuited jumper. Switching such a switch group comprises four contact pad.

They use simple one-button devices.

The operating principle of the triple scheme is as follows:

Such decisions involving just a simple one-button devices are recommended for locations where the number of I / O is the number of control places.

The implementation of the schematic of Figure 6 in the "natural" form. It would look like by mounting indoors, where necessary the control system of the three places

For example, to create a similar scheme under conditions of passing a long corridor, 1 input and 1 output, switched in the central zone, it is clearly impractical. Obviously, it makes no sense to turn off the light when a person has passed only the first half of the corridor. Meanwhile, the network can meet these recommendations "professional" electricians.

The number of control places, in principle, not limited. Another question - how complex are obtained such decisions. The more devices involved in the implementation of the management system, the more difficult it turns out the construction of the scheme.

Increases the number of dial-up lines, the terminals. Accordingly, the increasing costs of component parts and assembly. However, projects in the 4-5 control points are used actively. For example, such a project:

Circuitry for projects requiring an increase in the number of more than three control areas. In this case, an option on four control points (+)

It uses a pair of one-button simple switches the flow of action and a pair of switches that function reversing switch. The diagram shows only one light band. Meanwhile, there is a possibility of connection of additional lighting groups.

Additional light sources (light band) may at free rasklyuchatsya terminals and performing light sources intermediate transition zones. That is, in the same long corridors it is possible to use the scheme to a larger number of control places.

In this case, the light should be divided into groups of coverage - front, intermediate, output. With this solution, already actually go a long corridor to the half way, turn off the lights on the passed half and turn on the lights in the area of ​​the remaining half.

Multi-element circuit, of course, not very applicable for residential private sector, since such projects are rarely long corridors or rooms large area on several doors. But for the commercial sphere or the industrial environment such decisions demand.

Installation features to install walk-through switches, in general, does not exist. All work related to the installation are carried out in the standard version, according to the rules of installation of conventional switching devices.

If the budget allows, it is desirable to equip each individual device junction box. Then you need to get a small box in the number of magnitude-mounted switches. But also it can not be excluded with a single RC.

selection factors are directly related to the specific installation conditions. Normally, put the switch "flush" the surface of the walls - internal wiring diagram.

Meanwhile, the realization of projects for private properties (country) often runs with circuits device "Surface" (surface) mount, despite the fact that this approach is considered hidebound themselves.

For the first case will be required for the installation of Enclosures. For the second - false plates. These accessories are required to secure the switch in the niches of the wall panels or directly on the walls.

Cable rasklyuchenny strictly according to the scheme indicated on the back of the device. The circuit layout is simple one-button switch. However mismatch conductors at the wrong face divorce failure of the device

Electrical conductor, usually act trohzhilnye cables where the two conductors needed to power the system, and a third is used as a protective earth formation circuit.

Household lamps can be used without a "ground", if a non-metallic housing. Industrial lamps must have a grounding bus.

Of course, regardless of the destination, domestic or industrial-mounted network is always connected through the additional protection - circuit breaker. This instrument required power calculated by the current cutoff, and with reference to the constructed light passage control system.

Conclusions and useful videos on the topic

As a matter of practical application schemes for connecting feedthrough switches from several locations, you can learn of the presented video.

For connecting lived in the junction box:

Briefing on the connection of 2 places:

The emergence and implementation of this kind of devices in electrical networks may not be as important, but still reflected in the convenience of operation. Moreover, solutions based on the feedthrough of switches actually lead to energy savings.

Meanwhile, improving the equipment does not stop. Periodically, there are new developments, for example, like the touch switches.

Got something to complement, or any questions about the connection of the flow switch? You can leave comments to the publication, participate in discussions and share their own experience the power arrangement. Contact form is in the lower block.

Overhead sockets and switches are not as common as built-in ones, but there are situations when their installation is the only possible solution. For example, when there is no place to connect any... 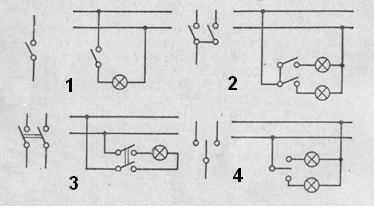 A two-way switch (bipolar) also applies to electrical switching devices, as does a regular (single-pole) switch. But if the latter only allows you to break or connect the electrical circuit, then ...

For the convenience of consumers of electricity, lighting devices are often connected to several control points - this allows you to control the light on a single lamp from several points. It is f...